In the pre-colonial Malayan world, the tiger is regarded as the incarnation of ancestral spirits, sometimes feared as a harbinger of disease, death and destruction, and at other times, regarded as the estranged brother of man. Shamans, vagrants, and sometimes descendants of royal blood were believed to have the gift (or the curse) of turning into tigers. But this symbiotic relationship between humans and tigers was broken in the 19th century with British colonialism, a period of ecological upheaval in which Malayan tigers were massacred. The tiger is a master of metamorphosis, and its physical death only called forth its resurrection in new mythical as well as metaphoric forms. It continued to haunt both the British colonists during the Pacific War and its aftermath, as well as contemporary Singapore, where it is seen as the colonial ghost of a suppressed past, as well as a kind of nocturnal spirit, embodying the core of Malayan identity. 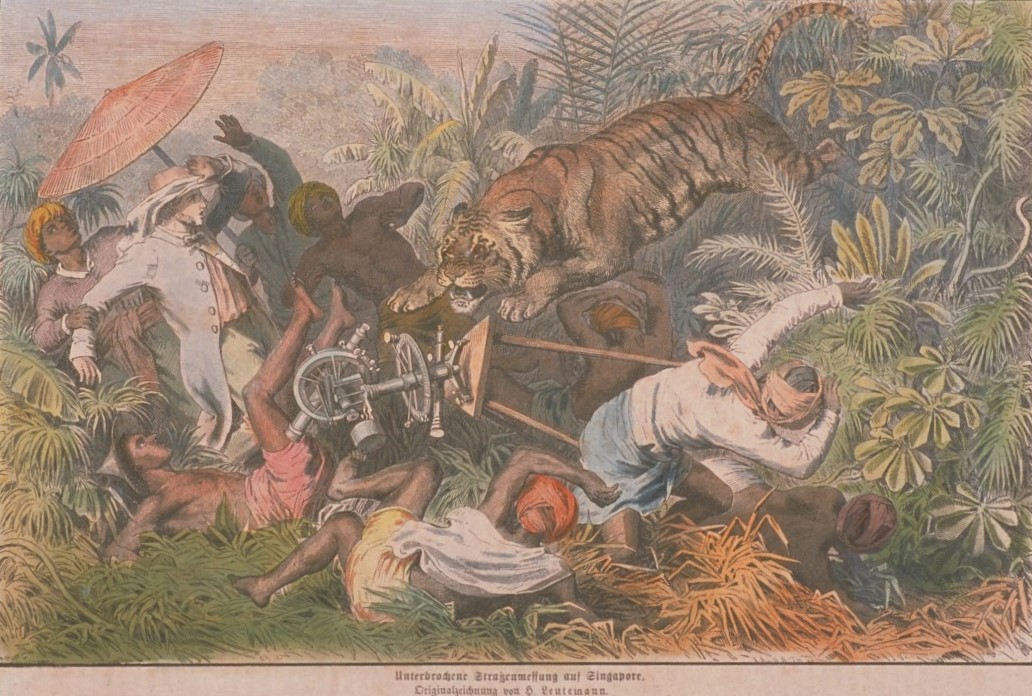 ‘2 or 3 Tigers’  (2015) is a partial restaging of the ‘Road Surveying Interrupted in Singapore’ wood engraving (after Heinrich Leutemann 1888), which depicts the first recorded encounter between a British colonialist and a Malayan tiger in Singapore in 1835. These two figures confront each other, while also singing a duet, which encapsulates the histories of man-tiger relations in the Malayan world. The man in question is George Dromgoole Coleman, Government Superintendent of Public Works in Singapore, Surveyor of the station. Accompanied by a body of convicts, he set out to survey a part of the forest, when he, and his entourage were surprised by a tiger, which attacked the theodolite – an expensive instrument used for the survey, but spared the humans. The Malayan histories of tigers and were-tigers are overlaid onto a narrative of anthropomorphism – that of cinematic animation, where the line between humans and animals have always been permeable. 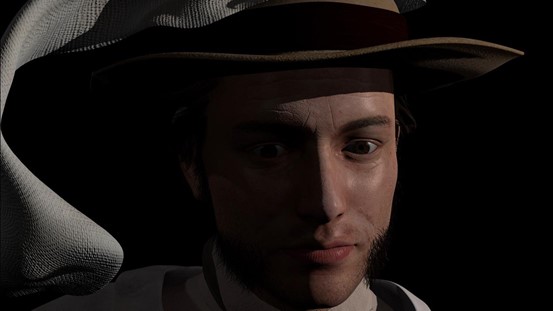 ‘2 or 3 Tigers’ condenses this complex interweaving of history, anthropology, mythology and ecology into an operatic duet sung by a pair of digitally recreated figures – a British Road Surveyor and a Malayan tiger plunging us into Singapore’s environmental history, one where lies many of the country’s unaccounted for darker pasts. Through this piece exploring an abstract, hypnotising, stylised narrative of both the human and the nonhuman, coloniser and tiger, reason and magic, pre-colonial and colonial, history, politics and folklore get both blurred as well as reaffirmed. Thus this binary archetypal clash between human and animal, outsider and insider, order and chaos gets subtly subverted as the movements and voice of both the Englishman and the tiger are performed by the British-Malay vocalist-musician, Vindicatrix. 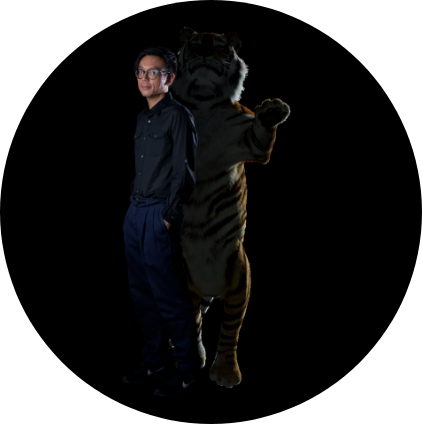 Ho Tzu Nyen makes films, installations and performances that often begin as engagements with historical and theoretical texts and artifacts.  His recent works are populated by metamorphic figures such as the weretiger (One or Several Tigers, 2017), the triple agent (The Nameless, 2015), and the traitor (The Mysterious Lai Teck, 2018) under the umbrella of his on-going project The Critical Dictionary of Southeast Asia – https://cdosea.org.