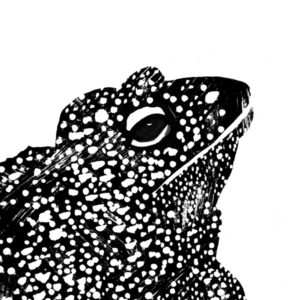 Toads are amphibians. They have dry skin and parotoid glands that produce bufotoxin, a poisonous secretion, to protect themselves against threats and danger from predators. However, many are not aware that amphibians in Asia are going extinct due to pollution, disease, and habitat loss.

Toads play a crucial role in Chinese culture, specifically in Feng Shui. Feng Shui is about the arranging of furniture/objects in houses or offices to create a positive flow of chi. A positive flow of chi is known to bring benefits and good news to those living there. A statue-like toad, which many call the ‘Fortune Frog’, is placed at desired places such as the entryways of houses, and is believed to bring wealth and prosperity. The Fortune Frog usually has red eyes, flared nostrils and sits on top of a pile of Chinese coins. Additionally, it also has a coin in its mouth. The frog is believed to appear during the full moon, and houses or businesses which are near its presence will be blessed with wealth.

Other than acting as a totem in Chinese culture, toads are also commonly used in traditional Chinese medicine (TCM). One of the Chinese medicines, which is called Chan Su, is derived from toad by-products. The toad glandular secretions and its skin extractions are known to contain compounds which are effective in treating cancers and inflammation. Therefore, researchers are searching for further potentials of the glandular secretions so as to develop new anti-inflammatory agents to counter and prevent cancer.

Toads are used in TCM as anti-inflammatory and anti-cancer agents for hundreds of years due to chemical components in their glandular secretions. However, despite its use in TCM, toads can bring diseases to humans through direct or indirect contact. Some research has found that toads can cause humans to contract warts. Warts are like solid blisters with a rough texture that appear on the body and it is known to be a skin cell infection. Toads have glands behind their ears, and these glands can pose a threat to humans as they are meant for infecting the mouths of the predators with poison. Therefore, when humans touch these glands and do not wash their hands with strong antibacterial soap, the bacteria can be transmitted to humans from the toads, resulting in the contraction of warts.

Toads can also cause serious illness in humans as they carry a bacteria called Salmonella. Salmonella does not only affect the intestines and the bloodstream, but it can also cause diarrheal illnesses. Similar to warts, humans can contract this disease through direct or indirect contact with the toads. Mere contact with the environment where toads live, such as aquariums and cages, can also expose humans to the disease. Salmonella can be transferred to humans when humans do not wash their hands thoroughly after touching a toad and touch their mouth with their hands. Hence, with toads being domesticated, the chances of humans getting the disease is relatively high if not careful.

According to an article, young children who are less than 5 years old have weaker immune systems and families should avoid having toads as pets. This is because humans with weaker immune systems could face very severe symptoms from the illness such as high fever, vomiting and diarrhoea. Due to the danger that toads can pose on the wellbeing of humans, it is interesting to know that the USA made selling and distributing of toads/amphibians illegal since 1975. There was an effort made by the USA to avoid the spreading of the disease in the community, though the law was not very effective. The amphibians continue to be distributed in the markets.